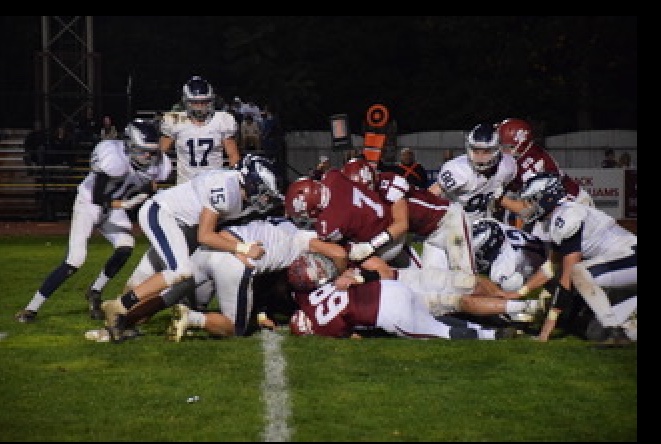 Crimson Tide Quaterback, Damon Yost breaks through the pile of players to score a Tide touchdown against Blue Mountain. Pottsville ended the season with a close game against Jersey Shore, losing 42-35. Damon said, “I’ve been playing football for 5 years, and what I love most is the bond you grow with your teammates.”

Senior Quarterback, Damon Yost has thrown 2,530 passing yards, including the regular football season and at Districts. He now leads his team in this category as they advance to the first State Final playoff game.

Damon Yost said, “I’ve been playing football for five years and what I love most is the relationships you build with your teammates.”

While having the opportunity to be the quarterback, he is making history and following in his father, Mr. Rusty Yost’s, footsteps. Mr. Yost was the quarterback in high school from 1991-1993. Mr. Yost is also now a defensive coach for the Crimson Tide.

Damon said, “Following in my dad‘s footsteps has been really cool. He and I talk about the position quite often. He has helped me improve as a quarterback through working out together and taking me to camps. Winning the District Championship was a phenomenal experience for my teammates and I. I felt blessed to have the opportunity to play quarterback in the District Championship game as I helped lead my team to a victory.”

Mr. Yost said, “It is a pleasant experience coaching my son. I focus more on the defense and stay away from the offensive huddle. This is so the opportunities that Damon earns are not looked at as coming from my position on the staff.”

Damon’s perseverance can be seen in his training schedule.

“We lift Mondays and Thursdays, then run on Mondays and Wednesdays. We practice every day. I’d say the hardest thing is preparing and planning for opponents,” Damon said. While he is on the field, he cultivates a positive mindset. He focuses on what routes his receivers are running in order to make the best play.

Damon looks up to not only professional football players, but family members that attend his games.

“Kyler Murray is my sports icon because he isn’t the biggest guy in the world, but he makes the biggest impact on the field in my opinion,” Damon said.

Besides looking up to his father, he also looks up to his grandparents.

“Both of my grandparents inspire me, and also attend my games. Seeing them after the games in the courtyard is the greatest feeling,” Damon said.

Damon would have an interest in playing with the Philadelphia Eagles if he had the chance to and favors the college football team Penn State.

Damon continues to work hard on and off the field, and loves the support he gets from students and fans from Pottsville.