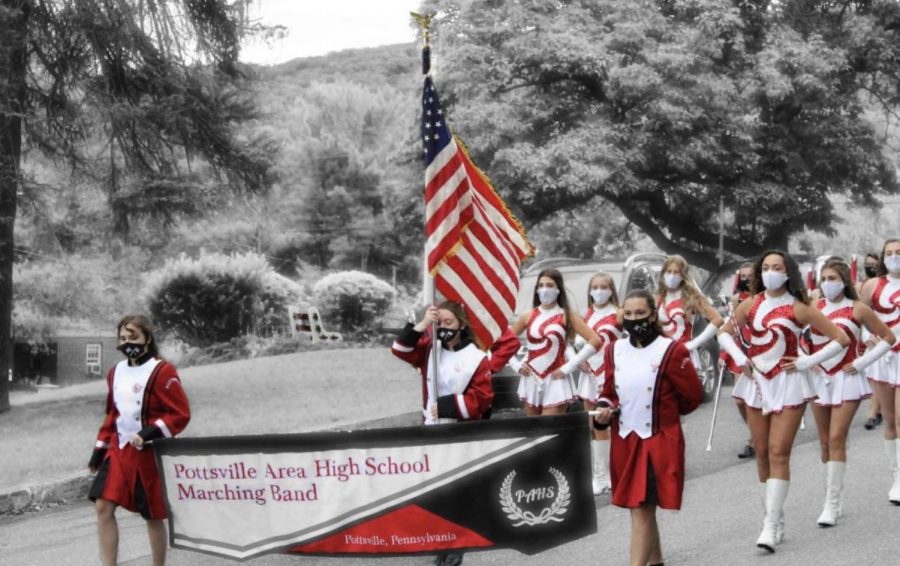 Many people in PAHS are members of the Marching Band. Before a game the band practices their routines at the middle school and then they march up to the high school stadium. “As the next twirling season is coming up, we are continuing to practice and are learning new combinations,”said sophomore majorette, Chloe Heintz.

As the days get warmer, the music gets louder. The Pottsville Area High School Marching Band is slowing preparing for a successful fall marching season. COVID-19 hasn’t made the process easy, but the leaders are optimistic and are preserving through everything, safely.
The PAHS Marching Band consists of instrumentalists, majorettes, flags, and banner carriers. Everyone plays a crucial role in the whole marching band.

Sophomore majorette Gwen Biddle said, “I really enjoy being on the majorette squad. We are all so close so when we perform it’s the best feeling. I love being taught and teaching others so I can’t wait for next year.”

Mrs. Katelynn Reichard is currently the director of the PAHS marching and concert band. Currently the band is getting ready for their annual springs concert. After their performance is over work starts right away on band camp(a 2 week camp for all band members to get ready for their season).

Sophomore percussionist Zowie Zokuskie said, “Marching season is a few months away and band members are already preparing. The percussion section has been meeting up once a week to start building techniques and working together to sound more put together. Due to the past season not being at its full potential it’s clear to see many of us are ready to start soon”.

The majorettes have practice before they perform at events. Right now they are practicing for a Memorial Day parade, which all members of the band are performing in. “Right now we’re preparing for the Memorial Day parade so learning the routine is the biggest thing. As far as the next twirling season goes, continuing to practice and learning new combinations is the best thing to do” said sophomore majorette, Chloe Heintz. The flags for the PAHS band are also practicing for the Memorial Day parade. Recently I have been practicing twirling at home. practices are starting in the upcoming weeks to prepare for the parade and will continue throughout the summer,” said sophomore Kenzie Androshick.