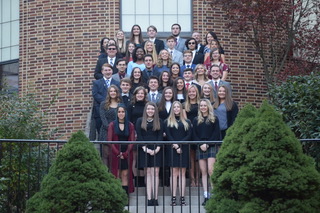 National Honor Society Inductees stand on the courtyard stairs after their induction. 36 juniors and seniors were admitted into the society that honors academic excellence. Inductee junior Jake Montgomery said, “Always put your best effort into your work while not overdoing your limits.”

Inductee junior Jake Montgomery said, “National Honor Society is for students that work hard to be within the top 10% of their class and who are model students overall. I would recommend to work hard and always put your best effort into your work while not over doing your limits. Mental health is more important than grades.”

Pottsville has always been known for its large group of accelerates and in the High School, they are recognized through the National Honor Society. At the ceremony on November 6 during a homeroom assembly, all students from the high school were present to watch the induction. Mr. Dave Sterner was the honorary speaker for the ceremony and was selected by the students who were inducted.

Inductee senior Owen Golden said, “I think the hardest part of keeping my grades up is managing my time to get everything done. This is because I play multiple sports and I usually finish my assignment either right before or right after practice. I do think I keep to a higher standard because people expect more from me, which gets stressful sometimes.”