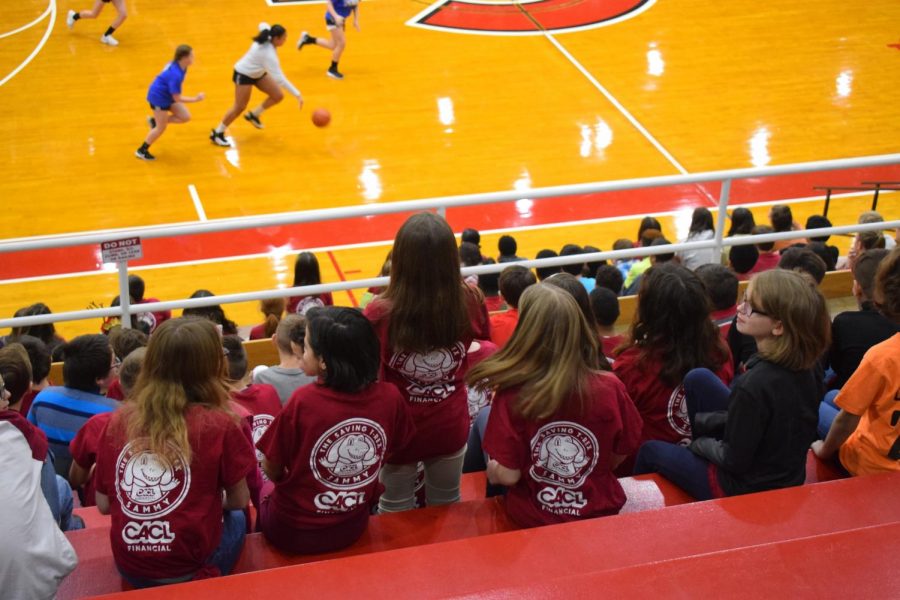 Middle schoolers from D.H.H.Lengel and Saint Clair sit in the bleachers watching their peers play basketball. They enjoyed playing basketball, watching basketball, and swimming. “I’m having a good time watching the game with my friends," eighth grader Alejandro Serano said.

On December 20th, the middle school hosted a Tide PRIDE Basketball for both Pottsville and Saint Clair students. Seventh and Eighth graders were able to participate in the basketball games, and all students from 5th to 8th grade had the option to watch. Any students who did not wish to watch or participate in the basketball games were given the option to swim in the pool. The students were allowed to dress down, preferably in clothing that would show off their Tide spirit.

The Tide Tones, a singing group from the middle school, opened the event by singing the national anthem, and then the games began. Though the games were engaging, they weren’t meant to be very competitive. Eighth grader Taylor Jones said, “I haven’t played basketball in a while, so I was mainly just doing this for fun.”

While most of the students in the audience were simply watching, the members of the band had the opportunity to play during the game. Mrs. Katelynn Reichert, the middle school band director said, “I like conducting this new ensemble that we started here at the middle school. I love this music, it’s fun for the kids. They get to experience a higher level music. It’s good for them to be part of events like this. They really enjoy it; it’s not for me it’s for them.” Eighth grader Nick Horvath said, “I’m having a good time playing and watching the game. The shirts are pretty cool too, they were donated by the CACL Federal Credit Union.”

The students had the option to watch basketball or swim, but Mr. Johnson and and Mr. Schuettler didn’t have to think for very long on whether or not they should life guard for the pool during the event. Mr. Neil Johnson said, “Mr. Schuettler and I are both so lucky to still have our lifeguard certifications. We’re two of the only ones in the entire district, so we get the opportunity to lifeguard for any PBIS event involving the pool. We enjoy it though. It’s nice the see the joy on all of the kids faces while they play in the pool.”