Another year of the Christmas Band Concert 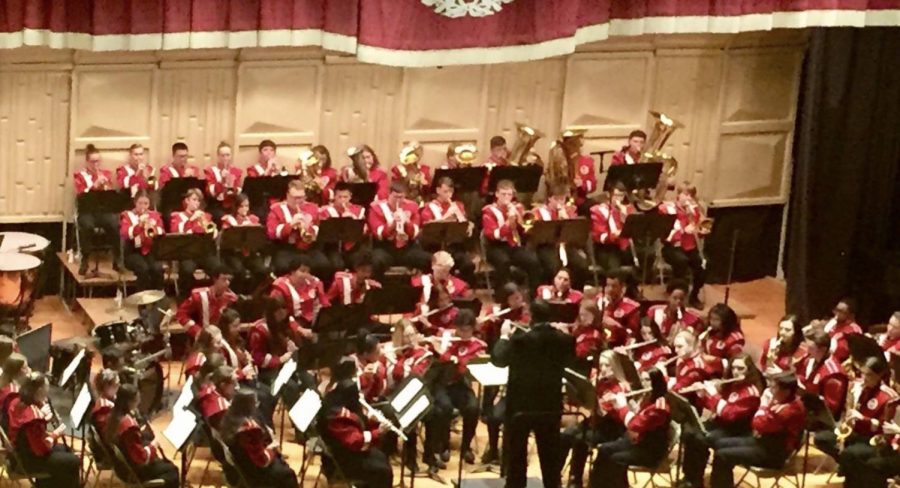 Students participating in the annual Christmas concert play their instruments. The concert will take place on Thursday December 19,2019. Freshman percussionist Zowie Zokuskie said, “My favorite song is Holiday Piece [by Jay Dawson] since I have a feature in it.”

“Slap!” is one of the many sounds the audience will hear at the annual Christmas concert presented by The Pottsville Area School District Music Department. The percussion section is featured in the popular song “Sleigh Ride” by Leroy Anderson, which includes the slapping sound of the whip and jingle of the sleigh bells.

The concert will be held in the high school auditorium on Thursday, December 19. It begins at 7:30 and the admission is $2.00.

The concert will begin with the D.H.H. Lengel Middle School Symphonic Band, which is under the direction of Mrs. Corrine Houtz and Mrs. Kayla Kurtz. This group will be followed by the Pottsville Area High School Band, under the direction of Mrs. Katelynn Reichard. During the high school performance, a smaller group of high school musicians, the P.A.H.S. Percussion Ensemble, will also perform. This group is directed by Mr. Stephen Horvath.

Many band members find the concert to be very exciting. While many prepare for the concert by cleaning their instrument, some clean their uniforms and others attend sectionals to learn difficult sections of the music.

Senior trumpet player Gavin Chen said, “I joined band when I was in fifth grade. At first I only did it because I thought it was cool, and I might as well keep going. I did it since then and I enjoyed it ever since. My favorite song has to be A Christmas Festival [by Leroy Anderson]. It’s a classic staple of the band, along with Sleigh Ride. No matter what songs we add, A Christmas Festival is like an anchor point. It everyone’s favorite at some point.”

Freshman percussionist Zowie Zokuskie said, “My favorite song is Holiday Piece [by Jay Dawson] since I have a feature in it.”

The band has many events during this time of the year. Musicians from the high school band perform in small groups at John S. Clarke for holiday events, for the tree lighting in downtown Pottsville and for faculty on the final day before the holiday break.