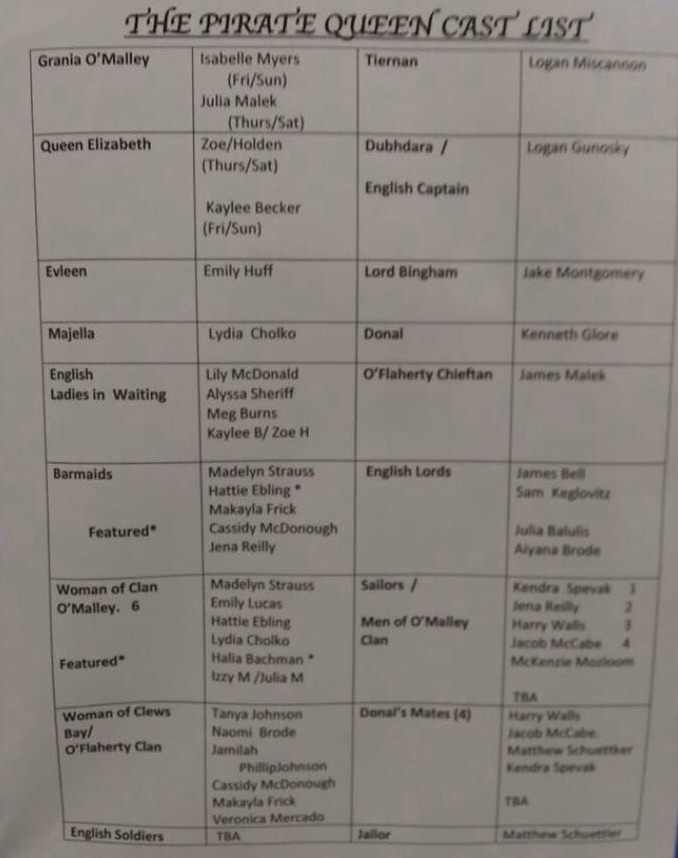 PAHS drama club students find out their parts by looking at a list like this posted outside the little theater. Students shared their roles with others on social media by posting the cast list on Facebook. Freshman Zoe Holden said, “I was so excited to be a part of The Pirate Queen as Queen Elizabeth.”

Students stomachs were in knots all day. On November 14th, 2019, in seventh period the cast list for the annual musical was released. This year’s extravaganza is The Pirate Queen.

“No way,” freshman Zoe Holden said as she read the cast list for the first time and saw her name under Queen Elizabeth. “I was so excited and just couldn’t believe I got that part!”

“My initial reaction was barely contained happy laughter,” said junior Julia Malek. “The shock still hasn’t worn off yet, but I’m getting there!”

“My first reaction, to be completely honest, wasn’t surprising,” said freshman James Malek.  “Everybody who worked on their audition and did well got the part they deserved.”

Mrs. Malek has been director of these annual musicals for the past 17 shows. When asked how long it takes to create the cast lists, Mrs. Malek said, “It varies. Sometimes it can take just a few hours, sometimes it takes almost a week.”

“I like that almost nobody knows about this show,” said Mrs. Malek. “It’s such an exciting story and it’s got a lot of color, passion and history. I think the audience is really going to enjoy it.”